Envol et Macadam hits a home run with its 2021 lineup

The Envol et Macadam festival announced its official return last week and today unveiled the lineup for the event to be held at Stade Canac from September 9th to 11th. Presented in collaboration with District 7 Production, this 24.5th edition of the festival dedicated to alternative music will offer the first major outdoor concerts presented in front of an audience in the Capitale Nationale since the start of the pandemic! Envol et Macadam and District 7 Production are particularly proud to have found a solution that makes it possible to hold the event despite certain restrictions still in effect. Thanks to this new collaboration and the openness of the Stade Canac’s managers, the festival will finally be able to reconnect with its public and offer them this special edition in a brand new distinctive and well-adapted environment which remains in an urban setting for which Envol et Macadam is renowned.

Three days, three styles
The 2021 program explores different horizons and relies on the variety and talent of Quebec and Canadian artists to make alternative music resonate again in downtown Quebec. Each evening of shows presented at Stade Canac will highlight a different musical genre in order to satisfy as many music lovers as possible.

On Thursday, rock in its various forms will be honored with Robert’s Creek Saloon, Alie Sin, Drogue, Planet Smashers and GrimSkunk. On Friday, we will make way for hip-hop with, among others, MCM, Wesbroom, Ty-Q, Sensei H and Souldia. Saturday will take place under the sign of punk, hardcore and metal. The shows will start in the afternoon and the sounds will gain in intensity throughout the day with The Bridgetsens, Hopeful Sixteen, Hate It Too, Aeternam, Boundaries, Mute, Comeback Kid, Voivod and finally Despised Icon.

The marché alternatif that first took place at the festival in 2019 will be back this year. This association between the alternative music scene and local artisans will allow festival-goers to discover their many talents and get their hands on t-shirts, posters, embroidery, buttons, jewelry and more. An appointment for lovers of art and underground music!

Ability to innovate and reinvent oneself
After a forced break from its activities last year, the organization of Envol et Macadam wanted to present an edition this year. The team explored different scenarios and had to revise their plans several times over the past few months. It was while discussing the possibility of a virtual edition of the festival with Karl-Emmanuel Picard of District 7 Production and l’Anti Bar & Spectacles last May that he mentioned his desire to one day present shows at Stade Canac. The idea caught on and this is how the association with Envol et Macadam was born.

This new central location, in the heart of the capital, offers many amenities and will allow the festival to accommodate up to 2,000 spectators with assigned seating in the stands, thus ensuring compliance with sanitary measures. The invaluable collaboration of the stadium managers and their openness in holding the event in their facilities allow the festival to pursue its mission and once again offer an exceptional showcase for Quebec and Canadian alternative music. 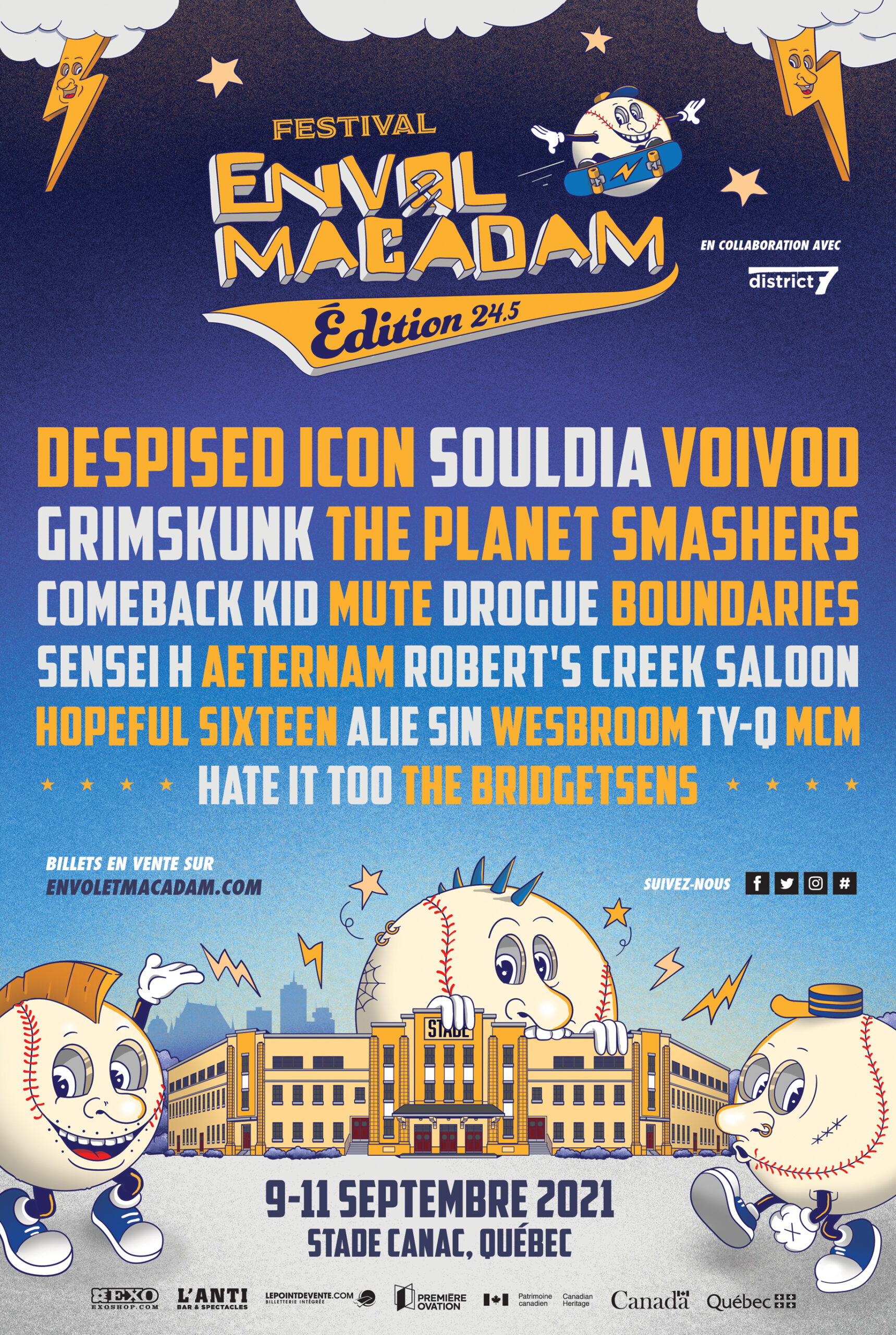 Ticket sales
Regular tickets will go on sale on August 4th at 8:00 a.m. There will be no 3-days pass formula this year, only daily tickets and E-Tickets format. These will be on sale on the Envol et Macadam website. It is also possible to get them at EXOSHOP.For each ticket sold, Envol et Macadam will donate a portion to the Fondation des Capitales de Québec which, for more than 10 years, has been supporting young people from Quebec City by donating equipment and money so that they can practice their favorite sport, baseball.All information relating to the event is also available at http://envoletmacadam.com

Envol et Macadam, 25 years of supporting emerging music groupsSince its creation, Envol et Macadam has been supporting emerging music groups while continuing to innovate in order to offer the next generation from here and elsewhere the opportunity to take part in an event that annually attracts thousands of discerning music lovers and many industry professionals in an urban and distinctive setting.Thank you to all the festival partners: Les Capitales de Québec, The Government of Quebec, The Government of Canada, SODEC, Première Ovation, EXOSHOP, Anti Bar & Spectacles, lepointdevente.com and Brasserie Sleeman.